I read a report in our local newspaper a week or so ago about an elderly couple who killed themselves in a pact that they made 30 years ago. The man was 72 and his wife was 66 – they had always said that they did not want to go into a nursing home when they became old or ill and that when the time came they would take their own lives. When the wife’s health began to deteriorate they got their affairs in order and sent hand-written letters to all of their friends, some of whom they had known for three decades or more.

One of the friends realised that the couple had or were intending killing themselves when she received her letter and alerted the police. The local Sergeant arrived at the couple’s large house, to find the door partially open.  The couple were fully clothed, holding hands lying next to each other on their bed.   The post-mortem examination recorded that the medical cause of the couple’s death was drug toxicity – they had taken an overdose of the husband’s medication.

Yellow ‘post-it‘ notes were left on certain items in the house, explaining that they had been washed and cleaned. The couple had made sure that all their bills had been paid and had even put money aside for the window cleaner.

The pathos of this story goes very deep in me. I found it incredibly moving and sad but also so beautiful, proud and strong! In this day and age, we allow women to abort a foetus, we should also be allowed to end our own lives with dignity when we feel that the time is right.  This couple knew that each could not live without the other, so they chose to go together, calmly, in their sleep.   I had been dwelling on these thoughts and the story of these two people for a while before I started working on this piece and my mind was consumed with this story the whole time I was applying the paint.   I did not set out to pay any homage, or create anything with obvious symbolism, metaphor, icon included in it – this is just how the emotion of these feelings came out (for me) in the creative process. 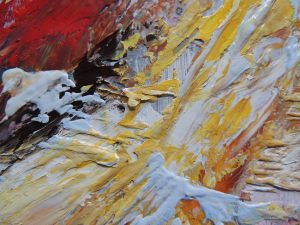 Some of my gorgeous peeps